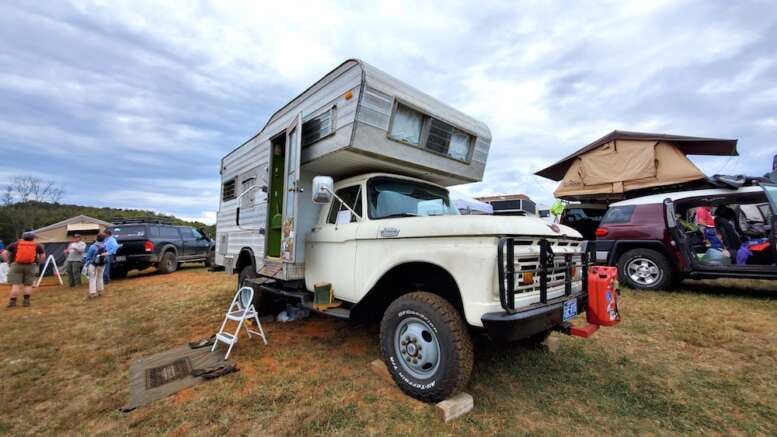 I certainly enjoy seeing all the rigs at overland events including the vintage camper niche, and Overland Expo East 2019 in Virginia did not disappoint. Definitely one of the highlights of my trip to this particular event was discovering this vintage, overland-upgraded 1964 Ford F-350 Open Road Camper that’s owned by Robert Lahr of Florida.

Factory built with the camper as two-wheel drive, this 64 Ford F-350 was converted by its previous owner to 4×4 using running gear from a 1976 Ford F-250, including a Ford 390 FE big block V8 powerplant, c6 automatic transmission and an NP205 transfer case. Robert showed me under the hood, mentioning, “Nothing show quality, but gets the job done!”. Maybe it’s not show quality, but this rig was definitely clean under the hood.  Besides the upgraded running gear, Robert mentioned the vintage Open Road RV is “mostly stock 1964 everywhere you look”.

Robert gave a rundown of how he acquired this Open Road camper. “I spotted the rig on Craigslist. I’m kind of a habitual Craigslist surfer, even if I’m not looking for anything in particular to buy. It caught my eye and man, I’ve got to have that thing!” After reaching out to the owner and agreeing on a price sight-unseen, Robert booked a one-way ticket out to Tucson the next day. A one hour Uber ride to the city of Benson, AZ and Robert met up with the owner, bought the rig on-site and drove it back home to Oklahoma City.

We moved over to the cab interior which Robert restored himself. He mentioned, “The interior is pretty much just classic vintage Ford”.  The only thing added was A/C through a Vintage Air style setup. “Yeah just basic you can sweep it out, clean it and use a leaf blower to clean it out whatever you need” Robert states. 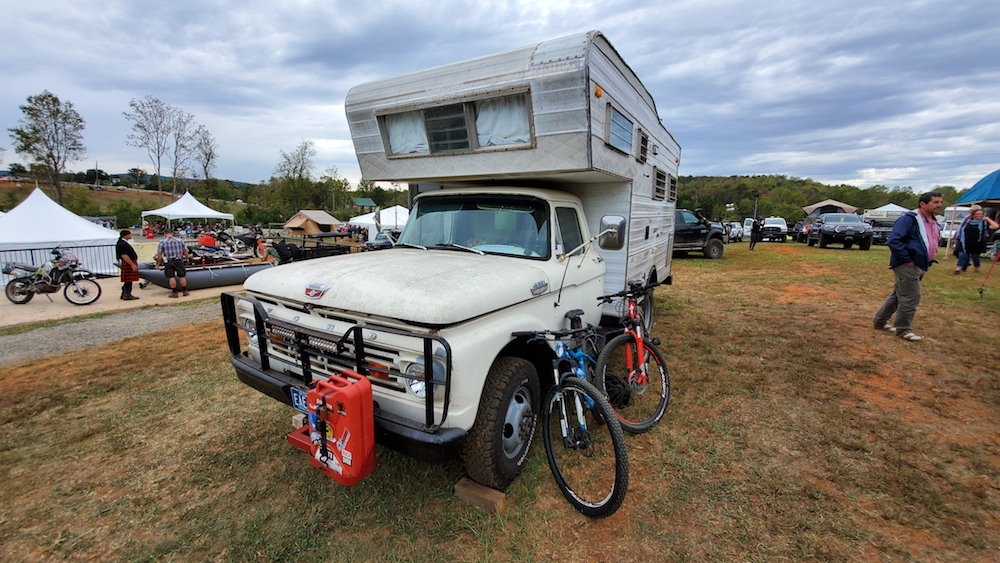 A tour around the outside of the perfectly aged exterior of the camper uncovered some of its amenities, including a massive 50 gallon freshwater tank and a 19 gallon on-board propane tank that runs the stove, the original hot water heater, heater furnace and even an interior propane lantern (more about that below). The original furnace was relocated, and in its compartment was placed an on-board air compressor for the air shocks, and for air to inflate tires, etc.

For electrical, there’s a 120 Volt shore power plug.  Robert mentions that the Open Road rig doesn’t require much power, and that he rewired and converted everything to solar and 12-Volt, with two 100-Watt panels on the roof sending juice to two 100-Amp Hour batteries stored with the charge controller in a bench seat in the camper interior.

Robert mentioned the one feature people most often comment on is the fold down back porch in the rear to a full sliding glass & screen door. It folds up and down based on an electric winch. 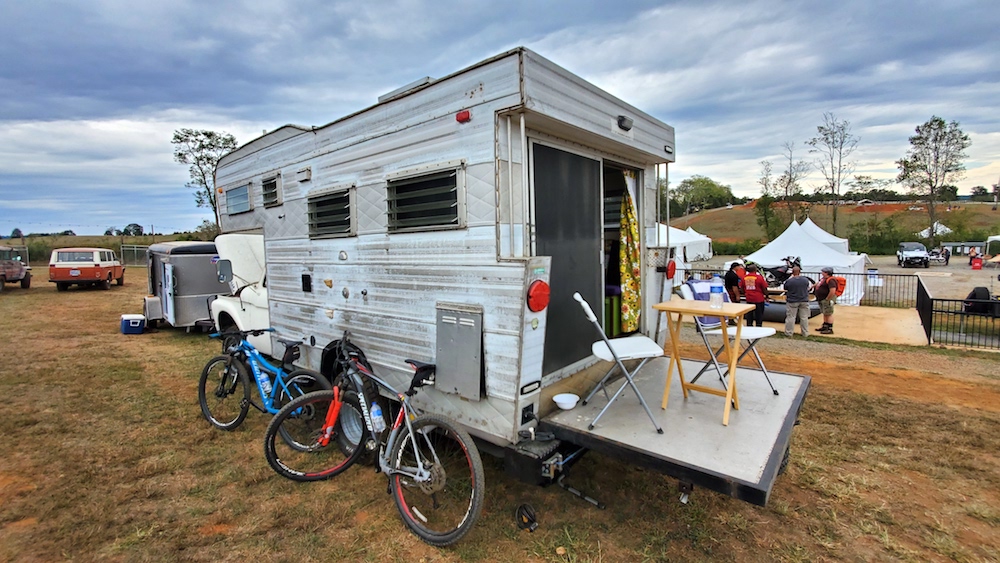 Robert and his wife reworked the Open Road camper interior some which was very warm and comfortable.  Much of the original cabinetry remains, but they did update the countertop, walls, flooring and some storage.  Robert pulled the original fridge due to it not being very efficient at keeping things cold, or organized on bumpy roads. A custom space was created for a 12-volt fridge/freezer cooler that they can just slide out to access. The old fridge space was converted to a closet.  The original sink, stove and oven are all intact and work very well. 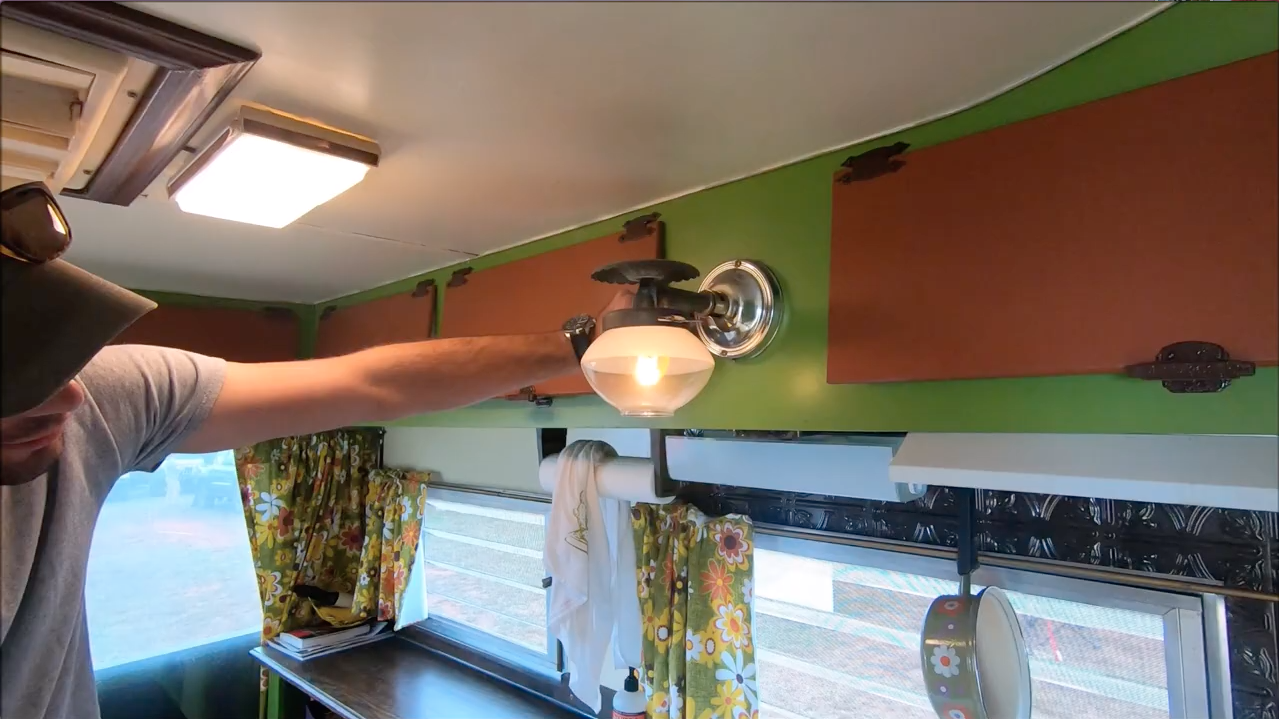 My absolute favorite feature was the original 1964 propane lamp over the kitchen.  It uses a silk mantle just like a coleman lantern, and Robert fired it up as a demonstration.  You can’t really capture the “vintage camping cool factor” in this writing, but if you get a chance to watch the video embedded in this article, it’s towards the end of the video.

And lastly to round the amenities, this vintage RV even has a small bathroom with a toilet and shower, and a comfy cabover bed with nice storage.

If you want to follow what Robert and his wife are up to in their overland Ford F-350 Open Road RV, you can follow his Instagram: @robertg_lahr.