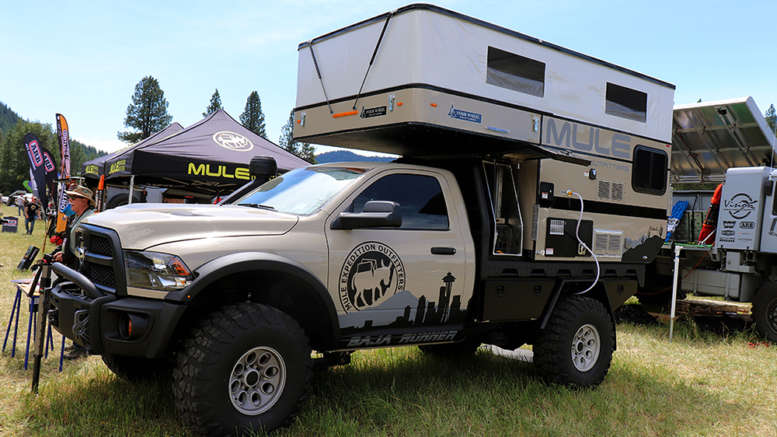 When it comes to overland truck camper rigs, it was immediately apparent that MULE Expedition Outfitters had taken things to the next level in the industry with their “Baja Runner” build presented at the Northwest Overland Rally near Leavenworth, WA

Luckily, I got there a bit early at a time when the crowd was calmer and owners Joe & Dana were relatively free to address my euphoria of sensory overload trying to take in the quality of rig they’ve put together. Joe was gracious to provide a detailed walkaround of this overland rig MULE Expedition Outfitters built for the rally.

MULE purchased the truck as a bone stock 2016 single cab, long bed RAM 2500 Tradesman with no power options and stock 20” wheels & tires. The RAM 2500’s powerplant is a healthy 6.4 liter gas HEMI engine. The MULE Expedition Outfitters team brought the rig the shop, stripped it down and majestically transformed it into the RAM 2500 Baja Runner you see today.

MULE added AEV’s 3 inch HD DualSport Suspension System designed specifically for the RAM 2500. They supplemented this with 5,000 lb air bags and built in bump stops. Air bags are connected to a custom designed air leveling system that can be controlled via a panel in the truck cab or through a smartphone from inside the camper.

MULE swapped out the existing Bilstein Shocks with ADS 2.5 inch piggyback shocks. They were specifically valved for this truck to accommodate the weight being carried and for the expected suspension travel. Future plans include upgrading to ARB Air Lockers, but the overland truck is currently running stock gear ratios & differentials.

The rear winch setup includes a custom MULE designed ½ inch steel mount with a Factor 55 XXL Flatlink and a ComeUp 12.5 winch (12,500 lb). MULE custom fit the winch controller plug in the rear mount for easy access. Beefy brackets were also added to the winch mount that would accept ⅞” bolts in case the truck needed to be towed/tugged from the rear. They also added a recovery link for an additional attachment point.

AEV’s Premium RAM front bumper was added with additional extensions for AEV’s High Mark fender flares. “These fenders were key to keeping the truck low, but still stuffing 40’s”, stated Joe. “Hard to do a build like this without getting the truck higher than it needs to be in terms of the suspension. With all the weight we’d want to keep it as low as possible and still not rub, so the high mark fender flares were a key component to doing this.”

A ComeUp 16.5 winch with synthetic cable resides within the AEV bumper and a Factor 55 XXL Flatlink is in the front as well. MULE also relocated the front winch control to a plug that sits in the grill for easy access.

Extruding out of the front bumper at each end are Hi Lift recovery points. And, MULE had a new ARB Recovery Jack on display, where it uses one of the recovery points to lift a front corner of the truck with ease for stuck situations.

Other upgrades include blacked out RAM headlights, an AEV heat reduction hood and MULE changed out the whip antenna with a stubby that matches up nicely with the ARB snorkel next to it.

Norweld of Australia manufactured the flatbed – and it’s common to see Four Wheel Campers mounted atop them since they pair up so well. What’s unique about this flatbed is that it’s been encased in Rhino Liner which looks great!

Some of the great features with this Norweld tray include an integrated large rear drawer and 4 storage boxes on the sides at each corner. It also has an additional 40 liter water tank underneath mid-vehicle which gives you lots of extra water storage for desert trips or long journeys where you don’t have access to refill. MULE stuck with Norweld’s LED rear light package which looks great, but custom added Rigid Industries Rock Lights as reverse lighting, which ties into the reverse back up system of the truck.

MULE decided to design their build to accomodate Norweld’s tunnel box option, where they relocated the fuel filler for security reasons to be behind lock & key. Inside the tunnel box, MULE also built a custom electrical panel that gives the ability to control power distribution around the truck. It houses the air compressor breaker & provides power to the camper. It’s set up for a future 2nd lithium battery and an auxiliary power port for external power outside the camper to use for outdoor lights, or whatever is needed.

The reason MULE is able to fit the Norweld tunnel box between the cab and camper is due to the fact the flatbed is 8 feet long and the camper (Four Wheel Camper’s Hawk model) is 6 feet long. FWC also sells a larger 8 foot Grandy model which would occupy the space where the tunnel box sits.

On the other side of the tunnel box (passenger side) is a Norweld tire mount, in which the 40” spare is fastened to. It’s a great way to clear up the rear undercarriage from a spare which wouldn’t accommodate a 40” tire anyways. It’s also great to help counterbalance weight, being the fuel tank sits under the driver side.

The unique vinyl graphics on the BAJA Runner were inspired by Dana & Joe’s passion for traveling to Baja, CA from Washington. The graphics feature a silhouette of Seattle & Mt. Rainier on the door, then transition to a silhouette of Baja, CA at the rear of the camper. Combined with the MULE logo, these turned out to be some outstanding-looking graphics, and the work was completed by Auto Trim Design in Washington.

MULE kept the upgrades to the interior pragmatic. Seats were reupholstered with Katzkin Leather. A Switch Pros Controller unit was added to control air bags, air lockers, air compressor, lights, etc from inside the cab. MULE also replaced the center basic RAM am/fm & climate control dash slot with a 10.5 touchscreen which has all the climate control functions, stats off the engine and truck, etc. 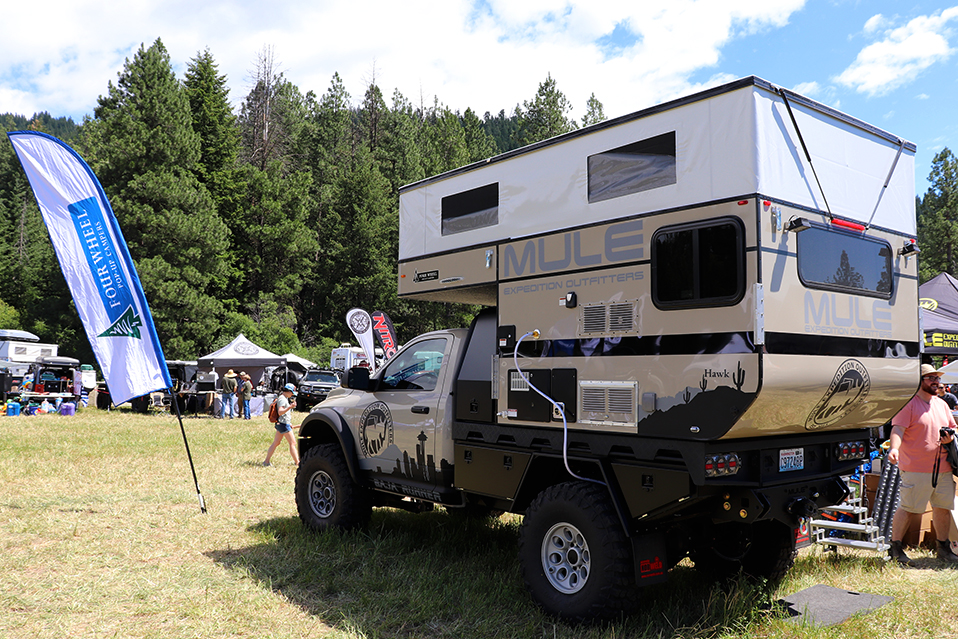 MULE is a Four Wheel camper dealer, and they decided to go with a 2019 Flatbed Hawk model. It’s outfitted with all sorts of Four Wheel Camper factory options which MULE liked, such as 160 Watts of solar on the roof. There’s a 6 gallon hot water tank which provides hot water inside, as well as to an exterior shower and a 20 gallon freshwater tank. There’s also a built-in furnace.

Walking around the exterior of the camper, the driver side of the camper has the exterior hot/cold shower, as well as shore power, furnace access, hot water heater access, the potable water fill, drain for grey water and main drain for winterizing. In the rear, MULE included the FWC option for rear LED spot lights when you need ample light at night.

Hawk Camper Interior
As Joe states, “This was the perfect fit for us”. MULE stuck pretty much with the stock Four Wheel Camper layout and features on the interior. “You’ve got loads of storage under both seats as well as the foot well storage which works great for shoes and other stuff.”  These seats and table in the rear convert to a bed.

The MULE’s Four Wheel Camper includes the dometic stove & sink option for the large flat countertop. They also opted for the weather pack, which is an extra layer of insulation, and as Joe mentioned, “We’ve camped in a camper just like this one in temperatures down to 15 degrees outside and comfortably slept with the furnace running”.

Joe also pointed out the huge storage under the bed. The size of bed they chose was a queen, but FWC also offers a king size option. As Joe mentions, the camper is easily wide enough for a 6 foot person to sleep sideways. ”Fits us, 2 adults and a big dog perfectly”., says Joe.

Personally, I am 6’1” and slept this way in the same size camper bed and there was plenty of room for someone even taller.

To keep the camper cool in the summer and ventilate the moisture in the winter, Four Wheel Camper includes 2 low power draw vent fans with 3 speeds, both forward and reverse.

MULE Expedition Outfitters did do a couple modifications to the electronic equipment in their camper. Joe mentioned the FWC equipment is more than adequate, but they wanted a bit more of a display readout with additional functionality. Thus, they upgraded to the REDARC Manager30 system which includes the ability to:

From the original battery box, MULE switched out the battery with a lighter lithium 100 Amp Hour version, and relocated it under the sink, which is near their power panel in the tunnel box on the driver side.

We really appreciate the time Joe & MULE Expedition Outfitters took to reveal the details about their build to Savage Camper. It’s great to see when someone has a fresh take on an existing idea, and MULE certainly has accomplished this with the BAJA runner. We also want to thank Four Wheel Campers for connecting us with MULE.

For all you RAM truck camper fans, don’t miss seeing the video and reading the full article about Kenn Miller’s RAM 2500 HD Power Wagon Four Wheel Camper rig also featured at this event.  In addition to a full video walkaround, we even caught video footage of Kenn’s Power Wagon navigating the overland course at NWOR so you can see what a Four Wheel Camper/RAM overland rig looks like in action!