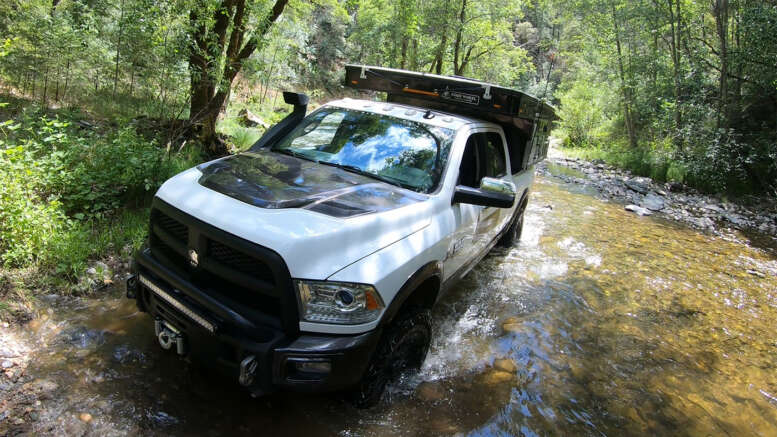 The window of opportunity opened last minute to finally take one of the Four Wheel Camper owned rigs out. Luckily, their behemoth AEV Prospector RAM 3500 HD truck outfitted with a black Hawk model camper became available. If you’re into truck camper setups, this is definitely a top notch combo pairing of a truck with a Four Wheel Camper. This Cummins powered rig is often present at big events they attend like Overland Expo. With it’s prominent RAM tailored AEV snorkel, 3” AEV suspension lift, big 37” tires and shiny black Hawk camper on the rear, you definitely get double-takes driving down the road.

As most already know, Four Wheel Campers are known for being rugged on the trail (hence their name) and comfortable for the campground. So as the owner of the blog Savage Camper I was eager to create some outdoor adventure with one. A short time frame of 5 days was allocated to take the truck. I could finally afford the time, so I decided to make the most of it. Camping and off road adventure mixed with video/photography work, what a great experience it could be!

Trip 1: Sierra Nevada Off Road Trek with the Four Wheel Camper Rig Turns Into Escape From a Storm

The first trip, I decided to meet up with my buddy Gary and hit some legit off road trails with amazing scenery in the Sierra Nevada foothills that we had access to and were familiar with. It was my chance to finally see how a Four Wheel Camper, as well as the AEV Equipped RAM 3500 Cummins held up to traversing 4×4 trails involving bumpy dirt roads, crawling over rock and multiple creek crossings.

Winding down into the valley on backcountry dirt roads we finally made it to the valley floor, comprised of bedrock, loose cobble rock and a significant creek winding through. I put the Four Wheel Camper RAM 3500 rig to the test here, driving the path that crosses the creek a few times. It was a fun 4×4 experience and this truck with AEV’s suspension kit and airbags handled it no problem. And so did the Hawk Four Wheel Camper it took being jarred around for half a day without any issue. If you get a chance, check out the video we made of the trip you can see what we put the camper and truck through in terms of off road adventure.

Simply an off road adventure was all we had planned, but mother nature decided to escalate things a bit. As you see in the video, inclement weather rolled in with a downpour of hail, rain, thunder & lightning right as we reached our destination. With the threat of the creek rising and becoming impassable, we traversed out of the canyon in an expeditious fashion through the stream crossings and just made it before the creek became completely cloudy with mud. It rose significantly where it would have become much more perilous to cross. The entire valley shifted from sunny, to feeling like we were suddenly somewhere in Jurassic Park.

The Hawk Four Wheel Camper and AEV equipped RAM 3500 HD truck held up no problem despite what both I and mother nature threw at it. With the downpour of rain and hail, and all the trail dust throughout the day, the interior of the Four Wheel Camper remained like new, with no water or dust despite the nasty outdoor conditions. I resigned myself to the very comfortable interior that night and slept like a baby in the Hawk camper.

2 Comments on "Adventure in the Four Wheel Camper AEV RAM 3500 HD Rig: Off Road Escape from a Storm"