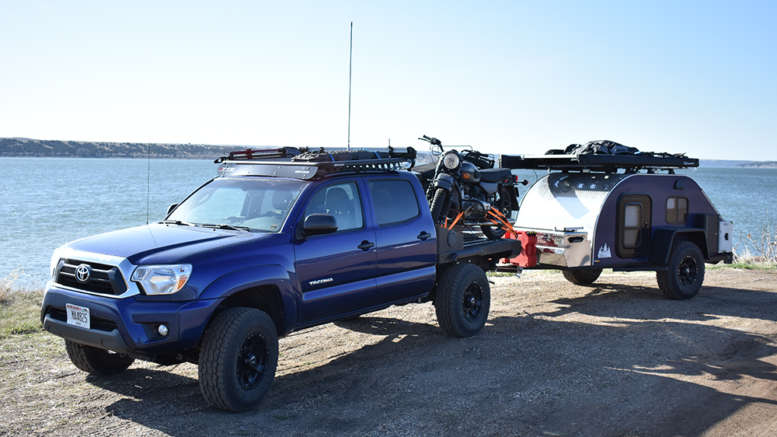 TCTeardrops has been on Savage Camper’s radar for some time. In our opinion, it’s one of the best options in the teardrop trailer market today: affordability, features, design, practicality and overall aesthetics. We had recently posted another article about a Jeep Wrangler/TCTeardrop overland setup, and ended up connecting with TCTeardrops owner Todd Mowrer. He and his wife Carol are avid users of their own product, with their own custom overland setup:

It’s obvious Todd is a very skilled individual, and being avid users of their own product explains why the functionality and design of their teardrop trailers seems so polished.

Here’s the details of what Todd and Carol have to say about their Tacoma/TCTeardrops overland setup:

Our Off Road vehicle of choice is a 2014 Toyota Tacoma SB, and of course we matched it up with our 5×10 TCTeardrops Off-Road Expedition (ORE) trailer that goes everywhere we go.

To make the Tacoma a little more capable of handling our overland adventures, we have added Bilstein 5100’s, OME Dakar HD leaf packs with Air Lift bags for stability, LT265/75/16 Toyo A/T’s, Raceline wheels, 4XInnovations’ 1/4″ skids on the engine and trans, Rhino Rack Platform to carry the Hi Lift Jack, Spare Tire, Traction Mats and anything else we thought we might need.

This is only part of our overland travel package; we typically bring either our mountain bikes or we haul the Ural Gear Up for even more adventures.  That’s why we are running the Dakar HD leafs and airbags, as well as a custom-built flatbed that I designed myself and had ROAM Automotive in Munising, MI fabricate to go with my Magnum rear bumper. My RhinoRack Platform slats allow me to tie down gear anywhere on the bed. The Tacoma pulls the load great and we make yearly runs from Wisconsin to Arizona for Overland Expo, spending 4-5 weeks on the road every Spring. The Tacoma has 85,000 miles and has never had any issues.  As for the Ural GU it’s a 2017 and it is as much fun as it looks, on and off road! It hauls my wife Carol, our Jack Russell, Lexi and myself to remote destinations. Not only does it put smiles on our faces but also the faces of people passing by.

The TCTeardrops 5×10 ORE is also setup to take into remote locations, and when we leave the house, every night is spent sleeping in the Teardrop – no hotels for us!  We carry a Dometic Porta Potti, on-demand hot water heater, 19 gallons of fresh water between the Rotopax and Road Shower, 180 watts of Zamp Solar paired up with a 100ah AGM battery and Dometic CFX-65DZ fridge, #3500 derated torsion axle with 10″ electric brakes, Lock N Roll articulating hitch, and Rhino Rack platform with both the Batwing and Sunseeker Awnings  to give us plenty of shade in the hot desert.

That’s how we roll!
Todd and Carol Mowrer 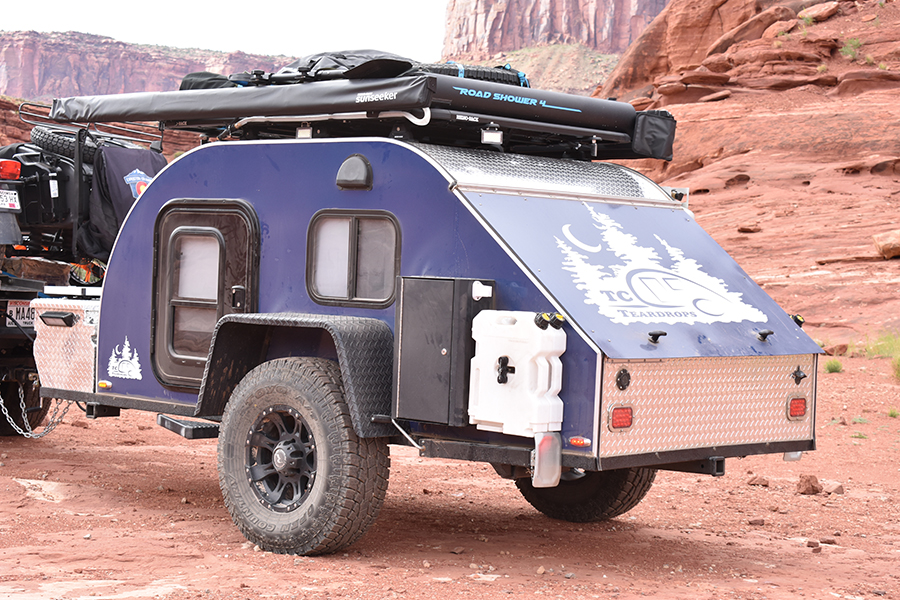 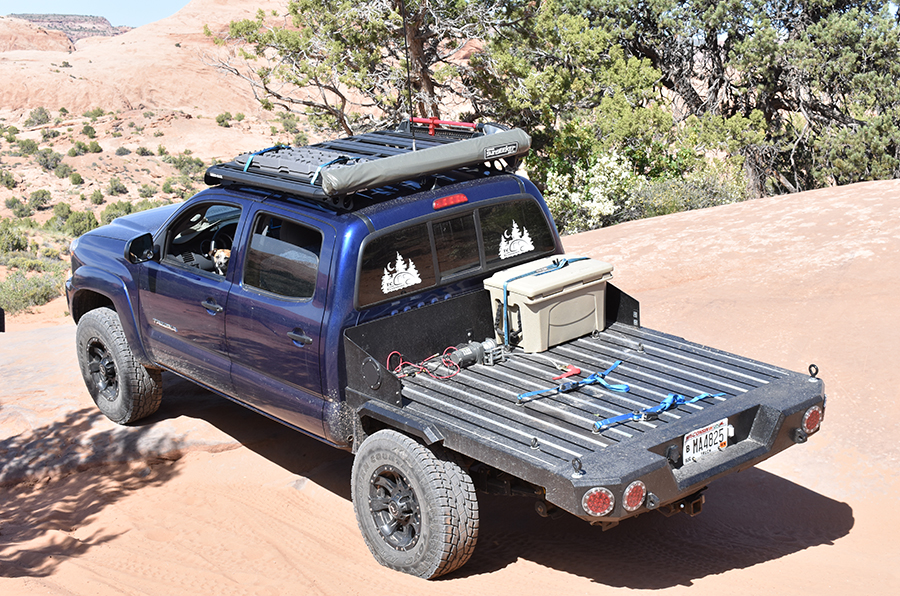 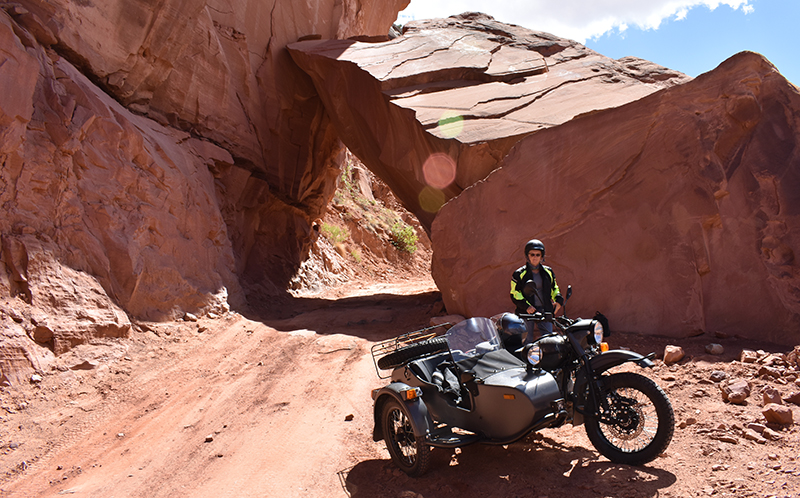 Todd and his Ural Gear Up Trail Motorcycle 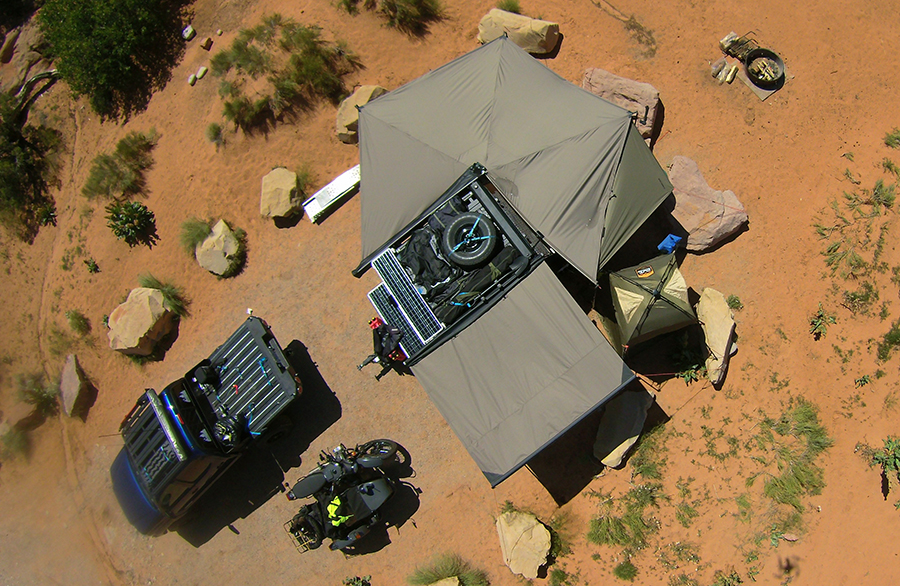