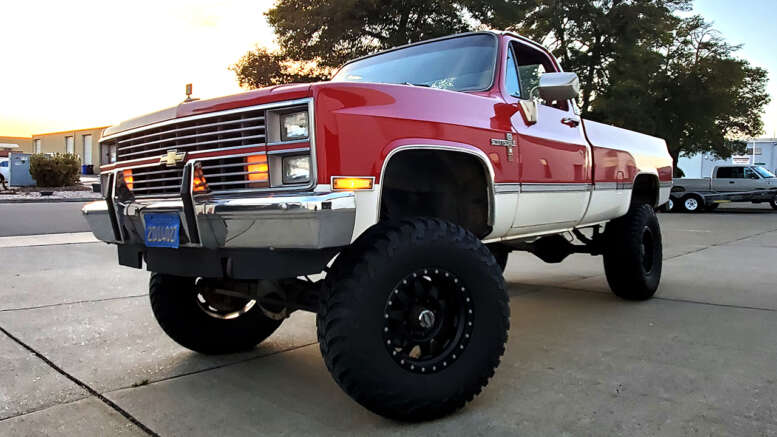 It’s been a long road of hard work, and owning a vintage squarebody Chevy K10 4×4 as the basis for a Savage Camper overland adventure rig has been a dream for many years now.

Chevrolet has been a part of my family throughout my life. My mom worked and retired through Chevy corporate and my parents owned many Chevy vehicles over the years growing up.

The first vehicle I owned was at 16, a 1974 Chevy Stepside C10 squarebody, which originally had an overhead camper on it that my parents and I would go to the lake, with a boat in tow. In fact, camping of many forms has been a part of my life since I was born.

However in terms of overland camping, a lowered 2wd C10 will not suffice. As a stop-gap, some time back I picked up a used Jeep Renegade Trailhawk for my commuter with 4×4 capabilities and built an SUV camp kitchen with off-grid power. This was a great step towards putting together a minimalistic overland camping setup that I plan to continue use of.

Ultimately though for Savage Camper, I’ve desired to build a unique, full-size overland rig worthy of a presence at some of the awesome overland events. There is so much cool overland gear out there for off-grid camping. The vintage overland genre has always been the crown jewel for my personal interests, so that was definitely a key factor.

For one reason or another, you don’t see Chevy overland rigs nearly as often as RAM, Ford or Toyota trucks. Because of my desire to put together a full-size Savage Camper Adventure Rig, passion for the overland vintage genre and familiarity with old Chevy squarebody trucks, I started saving $$$ and watching the used market for old Chevy 4×4 trucks over a couple years.

Where I Purchased the Lifted Chevy K10

Random luck struck one day when crossing paths with a shop neighbor named Naval, who is the owner of Naval’s Automotive in Newark, CA. He is truly a master mechanic in very high demand. Apart from major auto repair jobs, he’s very well known for lifting trucks, or fixing lifted trucks done improperly. He personally owned this Chevy K10 for about 10 years and just happened to have this truck for sale. When he showed me a pic of it, I was literally speechless; it was exactly what I had dreamed of owning. This simply was an opportunity I needed to capitalize on, and I was able to scratch together enough $$$ to make a good deal happen!

This truck is a 1983 Chevrolet K10 Scottsdale 8’ long bed with the original, naturally-aspirated 6.2L Diesel, 700r4 transmission and overdrive with relatively low miles. Some of the desired features this 4×4 suarebody included were:

Part of the deal was to replace the old 37” Cooper tires with brand new AMP Terrain Attack M/T 37×12.50R17 Tires mounted on the existing black 17” American Eagle alloys. All I could say when done is “WOW!”. Not only they look incredible, but also the difference in driving. Being new tires they were much softer, improving the ride of the truck which can be a bit bumpy with the 6” lift and leaf spring front end suspension.

Near Future Plans for the Chevy K10

Chevy Trucks and Body Rust
Old Chevy trucks are notorious for body rust, and sitting outdoors for some time, this truck is no exception. The worst areas are around the front and rear windows, where water leaks in so I will be addressing this first. Other areas are some spots at the bottom of the doors, the rocker panels and a few other random areas like one of the fender wells.

Her bones are good though the undercarriage just has surface rust, so a sand blast followed up by some Krylon paint should give some ample protection through the near future.

Finish Off Minor Front Fender Cutouts
Prior to the 37” tires, Naval had been running 40”s. To accommodate these, he had trimmed the front fenders at the lower ends to fit. The trim actually looks good with the 37” tires and guarantees I wouldn’t squash the corner of a fender on the tire in full suspension travel. I’d like the finish them off though in some way, as the pinch seam where the fender is trimmed is gone with exposed sheet metal edges.

K10 Truck Maintenance
I plan to run through all the fluids – front and rear differentials, transmission, etc (already changed the engine oil) as well as general maintenance greasing zerk fittings, etc. to keep the truck running while minimizing potential future mechanical issues. I had accomplished a full wash/wax within about 3 hours after acquiring the truck.

Overland Outfitting the Chevy K10
I’ve got great bones to work with on this rig in its current state. Additional overland plans include addition of some off-road armor and accessories, off-grid power and some sort of domicile probably in the form of a camper. Trucks are so versatile it’s a perfect platform to work from to build an overland adventure rig. It’s going to be a fun journey and I hope you follow along as I share upgrades and fixes to this 4×4 Chevy K10 as they happen.