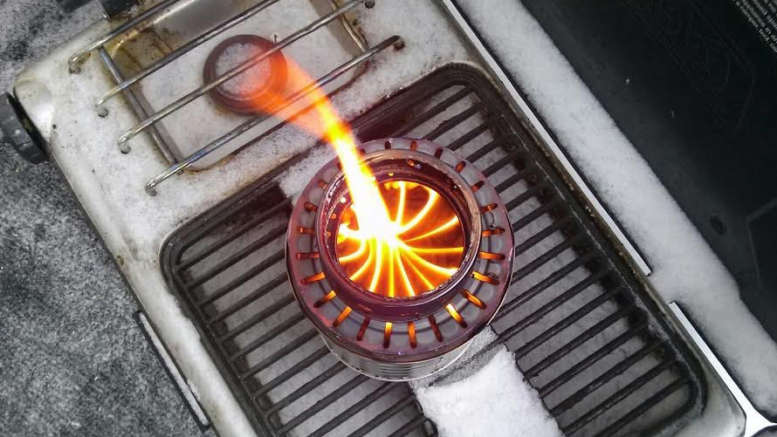 If you’ve ever searched for ideas about making your own DIY backpacking stove, you may have discovered that are a ton of options – from alcohol stoves, rocket stoves, wood burning stoves the list goes on. We’ve quite a few examples over recent years, and below are some of the better homemade backpacking stoves found, that people with a bit of ingenuity have created.

There are a bunch of examples of homemade alcohol stoves people have made. This alcohol stove by Steve Schweitzer is one of the best examples. This alcohol stove is based on a basic popular design using an aluminum can. What sets Steve’s model apart from others is that he came to his final design after testing many variants (shown in the video).

Steve shows you how to build one of these nifty little DIY backpacking alcohol stove which is extremely lightweight.  It’s burn time is about 12 minutes using HEET’s methanol product (in a yellow bottle). Steve runs a test, boiling 2 cups of water in about 7 minutes which is impressive.

While I’ve not had a chance to field test a DIY alcohol stove, there are a few drawbacks as an ultralight backpacker:

How to Make an Ultralight Backpacking Wood Stove – DIY

A better option, in my opinion, is a DIY backpacking wood-burning stove.  It’s sustainable and the only fuel needed are twigs – available almost anywhere you might go backpacking.

When researching, there’s also a broad array of wood stove designs and variant designs, so knowing which would be best is hard to choose.

As with any wood burning stove, one of the things you have to deal with is soot (so carry a bit of scotch brite or a brillo pad). A bit of a downside, you have to feed new twigs in from the top.  As a result, even with a slot on the side of your pot holder on the top of the stove, you may need to remove your water to feed the fire if boiling larger amounts.  Some designs use a bit of physics to promote air injection to fuel the flame with oxygen, make it burn more efficiently – hotter and cleaner.

One of the better designs I’ve found seems to be an example built in the video above by David’s Passage. It essentially has 2 walls inlets for air on the out water at the bottom, and outlets for the heated air on the inside wall at the top.  This creates airflow as cool air enters through the bottom, heats up and exits out of the top, fueling the fire with oxygen.

Here’s a variant of the backpacking wood gas stove that seems to work well. While this video doesn’t spend a lot of time as to how the stove is made, Joe Marques spends a good amount of time showing how it works. The video doesn’t actually show a boil test which would have been great to see, but nevertheless you can see a strong, clean flame.

One important thing to remember with these stoves – do not touch them when in use they’ll be hundreds of degrees. We’ll be adding more examples soon, including one of our own tests so stay tuned!

Down Backpacking Quilts Versus Sleeping Bags

What is Ultralight Backpacking?